Friday the 13th-What's the Hype? 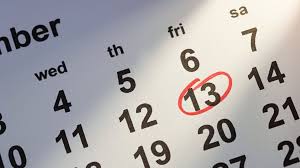 Digging deep into its origin, it looks like there are a few theories why Friday the 13th freaks us out, but a big one was that it started a long long time ago with good ol' Adam and Eve.  Apparently that was the day when Eve gave Adam the fruit. Ironically it also the day Jesus was crucified. Others say the fear began due to certain tragedies occurring on that particular day.

Another interesting theory about why the 13th has a negative connotation is that the number 12 symbols completeness. There are 12 months, 12 zodiac signs, 12 hours on the clock, etc. So the number 13 "throws things off" and is considered a breach of sorts to the rule hence being an unlucky day to do anything productive.

Of course the most famous horrors of this date are the "Friday the 13th" movies that began in 1980 and have terrified us for years.

Did you know there is actual phobia of Friday the 13th?

There is an actual fear of Friday the 13th and it is named friggatriskaidekaphobia-(can you say it let alone have it?).  If you think only a few suffer from this phobia, there is on average around 19 million who do. Most people whether they claim the actual phobia or not, will refrain from travel, driving, surgeries, etc. that could put the "spell" of Friday the 13th on them.

Or maybe you are afraid of the number 13? We have all heard the number "13" is an unlucky number so it further feeds into the notion that Friday the 13th is just going to be an ill-fated unsuccessful day.  The fear of the number 13 is called triskaidekaphobia. Some people avoid doing much of anything if it has to do with the number thirteen!

If you are superstitious and do not like Friday the 13th you probably will stay home. So, if you do decide to not "tempt fate" and stay in.....

why not do a binge watch of the ELEVEN

Friday the 13th movies?  (Wonder if they will make two more for kicks...).